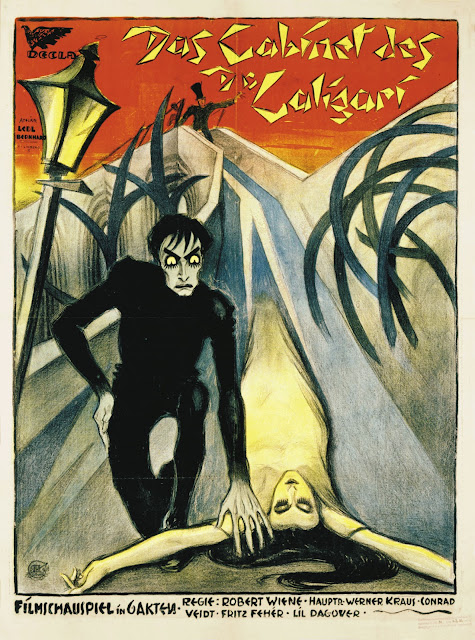 Das Cabinet des Caligari (1920), directed by Robert Weine, can be called a piece of from the expressionist movement in Germany, which had a rise in style around the time of the First World War. With Expressionism, the focus of the film is to evoke a mood, through disturbed imagery rather than to give a realistic account of a plot and the theme is set around the distorted reality conveyed by the set design and cinematography of shadows. It is meant to raise doubts and create a mood for the audience that unsettles them. It is believed to be the first horror film, and is responsible for making many tropes that are still present in modern film.

As Roger Ebert, film critic of Siskel & Ebert fame observes of the film uses this unique imagery to exploit perspectives, shadows and a minimalistic art style, which plays a part through the main portion of the film. The film has a differing point of realism, as the setting of the beginning is very naturalistic but with a withering landscape. The town is in decay and all characters seem distant.

'The fantastic nature of Francis' story is shown in the transition between the hospital and his vision of the small town Holstenwall.'- Rachel Freeman (2006) What this shows, as Rachel Freeman points out in her fantasy and dream writings of the film, that when he starts to tell his story it begins to fade to the main setting of film which based around painted sets that strikes the mood of being enclosed, narrow and imposing with twisted perspectives positioned to stretch on until the distance and angles, juxtaposing to the sets being based outside. This whole section is presented in flashback through the main characters point of view. The whole film makes a point of delving in each time a discovery is made, to think again and carries on when it might be over until there is sense of distrusting the point of view of the characters. It drives at the audience psychologically, thus making Francis, the seeming protagonist, an unreliable narrator.

When watching the film, the audience is introduced to Francis who tells the story. Told from his point view, the character of Dr. Caligari has a sinister screen presence, being the focus of many close-ups, giving foreboding gestures and expressions, as well as Cesare, capturing narrow shots and the shadows of his face for startling contrast. Though spending the film trying to hunt down Dr. Caligari, it is revealed Francis is subdued and considered as a mental patient by characters he interacted with earlier. Roger Ebert makes a point in his review saying ‘Wiene is fond of the iris shot, which opens or closes upon a scene like an eye. This makes the point that we are looking and are privileged to witness events closed to other people. He also sparingly uses a device of superimposing words on the image to show Alan feeling surrounded by voices. Wiene's closeups lean heavily on Caligari's fierce and sinister scowl, the dewy innocence of Jane, and the wide-eyed determination of Alan. The Somnambulist is not very expressive -- he certainly lacks the charisma of Frankenstein's monster, who in a way he inspired -- and is most often seen in long shot, as if the camera considers him an object, not a person.’ After the film returns to the present and presumably reality, the changes in character portrayal is noticeable. Caligari has changed, looking closer to a professional than his other warped self. Cesar is part of the asylum, alive and awake, walking back and forth in a daze, holding onto a flower, symbolizing his captivation for Jane. In presenting this twist, the audience is unable to tell for certain if it is a deception or truly the reality of this world.
Das Cabinet des Caligari has shaped modern film in terms of being one of the first of this style, creating iconic images and stylistic choices that can be seen in every shot. In the scene of Cesar enters to murder Jane, shadows looked as though reaching down like knives or like fingers which could represent Dr Calgari’s control over Cesare and Cesare’s wanting of Jane. It has a dream-like quality, which is represented from Francis’s neurotic from of mind, as explained in source 3, ‘The heavy visual imagery latent in dreams provide clues into the minds unconscious. Francis’s portrayal of his delusion is very akin to a dream in that the visual imagery is rich and fanciful, like a dream, with distorted shapes and shadows.’
Bibliography
Source 1, Roger Ebert, 2009 The Cabinet of Dr. Caligari film review http://www.rogerebert.com/reviews/great-movie-the-cabinet-of-dr-caligari-1920
Source 2, Rachel Freeman, 2006 Fantasy and Dream work in The Cabinet of Dr. Caligari study http://courses.washington.edu/freudlit/Freeman.Caligari.html


Source 3, The Historical Evolution of Fear and Scare Tactics study of The Cabinet of Dr. Caligari http://fearincinema.umwblogs.org/silent-films/abnormal-psychology/the-cabinet-of-dr-caligari/