In our first lesson the character workshop, we went over what makes a character. Due to how they are characterized in the story, that gives the designer visual clues to then start out to figure out what they look like. The style of the character drawn is influenced by the genre and by who the piece is intended for, with simple shapes generally more for a younger audience. In animation, you tend not to see truly realistic human characters unless in video games, because the more realistic a cartoon is drawn, you start the realize the proportions don't always fit with real life proportions, and the more you try to make a character fit realistic proportions, the more you lose the design and style of the original character. When thinking of a character, it's best to break them down into shapes, which are commonly circles, rectangles and triangles. These shapes give strong indicators to a character's personality and role within the story, so are only made up of one or two of these types of shapes. After discussing how these shapes were important for beginning to design a character, we were all each given an example of an existing character to breakdown, simplifying them in shape, but still keeping their features recognizable.


My character was The Hulk, a comic book hero. On my first attempt, I tried to simplify him down, as he was drawn in the example to be perfect mix of a realistic, advanced style of design, yet you could tell he was a cartoon character. The basic shape of the Hulk was purely rectangular but there was definition in the muscles and the way the features were drawn that wasn't perfectly copying Human anatomy but was complex enough to tell anyone looking who the character was and what demographic the drawing was following. I had trouble with the features of the face, as the way I drew it made who I was drawing resemble the Hulk less. 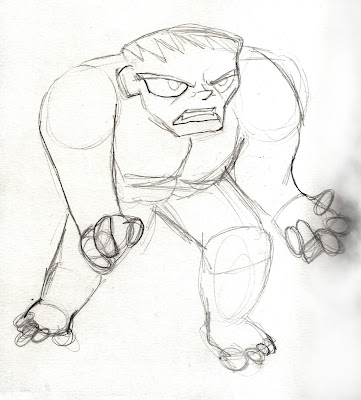 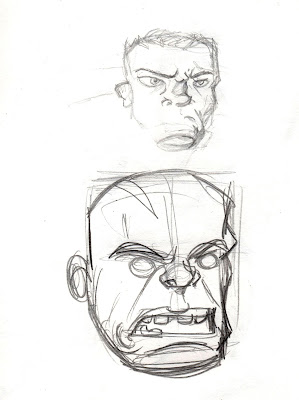 This time I started of trying to draw realistically, but again losing The Hulk. 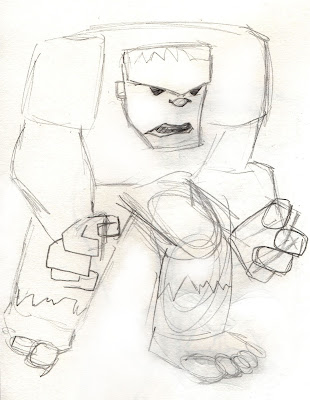 I finally started to break him down to his core shape, simplifying him to see ho he is really made. 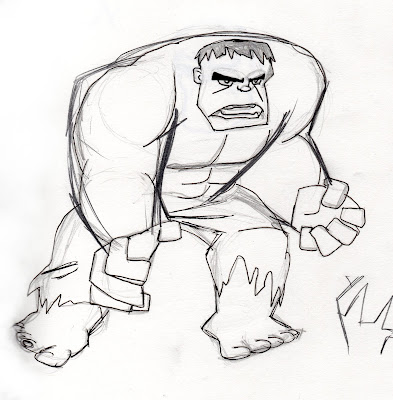 From there, I added some of the definition back, but deliberately kept some features back, like his cheekbone. It's still enough to make his recognizable as the Hulk, but simplified for a purpose.