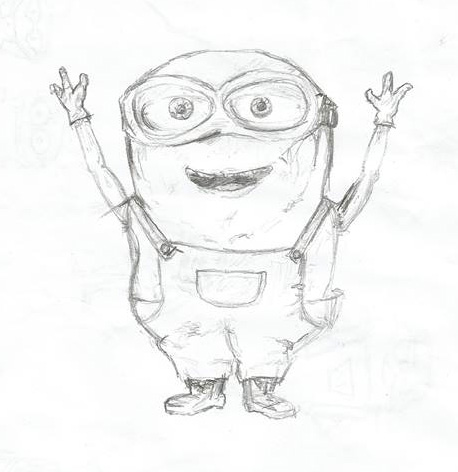 For this task, I was given a Minion from the 'Despicable Me' series to play with the style, making it clearly the same character but changing the way it is drawn. I chose to draw it with more realistic features without adding anything from the original design, as I was influenced by artwork of life-like versions of cartoon characters, Homer Simpson and Professor Farnsworth from 'The Simpsons' and 'Futurama'.

After changing the style, we were given example of how the construction of a character is made of shapes, which are informed by their character type, role in a story and personality. A character made from circles indicate a soft personality, blocks and squares make strong characters and ones with sharp features like triangles suggest danger and are usually featured in villainous characters. I then had to find ways of creating a Minion from different shapes, resulting in a change of character but it still had to look like a Minion. I was given some examples as well of implementing the construction shapes better, by slightly adjusting angles and adding more geometry to make the shape work and give it a slightly different style, but still recognisable.
Posted by zoe thornton at 22:19