The process of modelling a full set was dictated by a set of orthographs, setting up what the model looks like from the top, side, and the front view. The objects and background were created from simple polygon shapes that were edited and modelled. Walls and blocks had to be cut out, rotated and bend into new shapes and each plank for the crates have been randomised and pulled slightly out of shape to add small details for the authenticity of the scene. 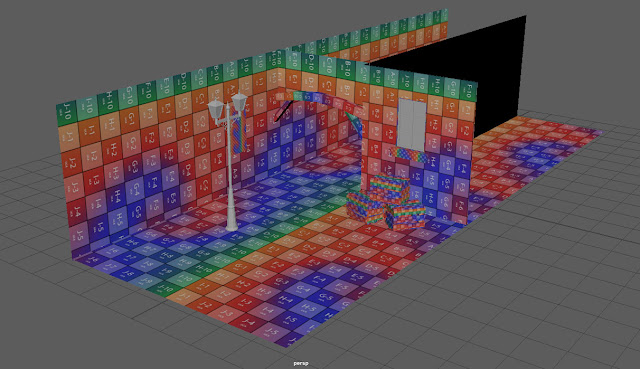 Each piece of geometry needed to have their UV's cleaned for the scene, otherwise for the render the textures would look distorted and facing the wrong way. Even when it may not be visible to be faced with scrutiny, it helped in the long run to sort out all kinks the objects. 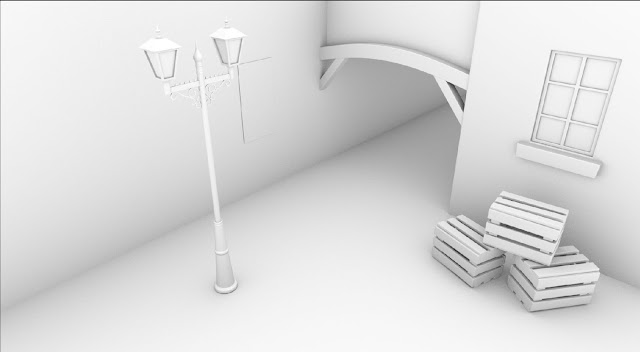 The Ambient Occlusion Render acts as the polar opposite to the Glow Matte Pass to add and bring out a little more dirtiness to the scene, for realism. It works with object bump and specular maps which works to make 2D textures stand out and look 3D by working with shadows and light.

After taking the Ambient Occlusion Render and the Glow Matte Pass into Photoshop, it was a case of tweaking the scene slightly just for more detail. With the Glow Matte Pass, I was able to edit the source of light in my scene and give them more volume with a gaussian blur, which doubles as more realistic glow.