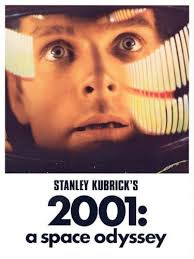 This essay will discuss the meanings and thoughts behind 2001: A Space Odyssey. As a film which has notable acclaim, it still divides audiences, who may be taken in by the how the film looks in the cinematography, beyond to the deeper meaning behind certain moments, whereas the rest of the audience may be put off by the slow pace of the film, which leaves the audience expectant but unsatisfied when tension is built up but goes on building. Like many of the long zooming shots of space crafts, which take up a few minutes of screen time, the director Stanley Kubrick challenges the viewer and establishes his dominance over expectation. This quote from the Guardian review of the rerelease of 2001: A Space Odyssey by Peter Bradshaw can explain some of the theories the viewer may have of the film as a whole: “Maybe only rocket science and deep space could absorb Kubrick’s famous coldness and control and tendency to visionary gigantism. It has become customary to place 2001 in a challenging or dark or dystopian sci-fi tradition... actually, 2001 doesn’t exactly fit that first camp either: something in its mandarin blankness and balletic vastness, and refusal to trade in the emollient dramatic forms of human interest and human sympathy.” (Bradshaw, 2014)

Kubrick can be described as an auteur director, as many of his other projects such as The Shining (1980) have the same detail of focus to symmetry into compositions, as well as lighting and simplistic design. Symmetry has effect, such as when one of the focus characters, Dave walks down the tunnel of his exploration spaceship. The tight and constricting area is set into a octagon and shoot with white light so it almost glows, and has the effect of conveying perfectness and control which lends itself to unease, which is the embodiment of the state of control the character of the HAL 9000 has in that section of the film. 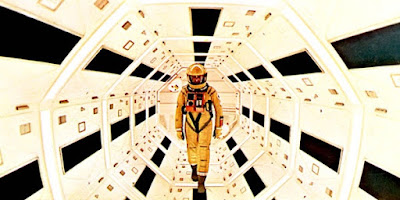 The film raises a number of symbols that tie into the climax and ending including the large monolith or monoliths that appear multiple times in the film, the foetus that appears in Space looking over Earth and the scene of the focus character Dave in the Victorian-style luxury house, looking at himself aging and dying. There is little explanation to the significance of these objects, but it is presented so that the audience cannot help question the meanings of film or whether there are any deeper meanings at all. Symbolism of rebirth, evolution and the control of God and the unexplained mysteries of the universe can be called into question and in analysis of audience reaction to the considered confusing nature of the film and for points that are never expressly explained the film, Film Critic Roger Ebert writes on his website, in regards to the bedroom scene “My intuition is that it came out of Kubrick's imagination; that he understood the familiar bedroom would be the most alien, inexplicable, disturbing scene he could possibly end the film with. He was right. The bedroom is more otherworldly and eerie than any number of exploding stars,” (Ebert, 1968) which could mean that Kubrick wasn’t trying to convey realism but metaphoric expression of otherworldly phenomena. 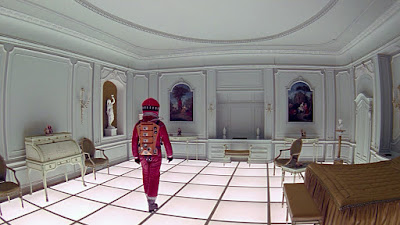 The monoliths seem to spark a connective link to the prehistoric and the future as well as thoughts on infinity and could symbolise as the desire to evolve, as well as knowledge, power and discovery, as the many creatures and Humans that come into contact with it are drawn into discovery. As in the novel based around and written for the film by Arthur C. Clark, who worked with Kubrick on the film, the monoliths are described as ancient alien technology which monitors the progression and helps develop the evolution of apes into man. In an article for the Hollywood Reporter, a review of the film talks about the meaning behind the final scene: “The entire sequence can be accepted as an allegory of the act of conception. At one point during the liquid churnings of a tailed white spermatozoic blob thrashes toward a distant ova shape. Dullea, now aged, lands his space pod in a bedroom whose illuminated floor and walls reveal Louis Seize decor, Empire furnishings, romantic paintings, a womb expressing timeless comfort and personal taste. He sees the alien as himself, and an older, dying figure in his likeness on a deathbed, one arm lifted in supplication or farewell toward the towering monolith. The figure is replaced by a perfectly formed starchild, an aureoled fetus looking beyond this solar system, forming an infinite trinity in the heavens with the arc of the moon and Jupiter, reborn, innocent and aware. Appropriately, all the evidence of transitory technology is absent, leaving only man's vision, perpetuated in eternity.” (The Hollywood Reporter, 2014) 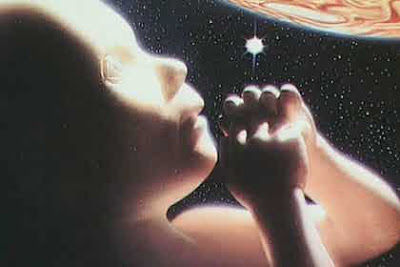